This question has been asked before, but the older question doesn't have an answer

The question Why is my car tramlining(pulling/veering when I hit road imperfections)? has been voted to be closed because there is an older question How do I prevent bushing wear and what parts besides the suspension uses bushings?.

Note the following statement provided for voting to close questions as duplicates:

duplicate: This question has been asked before and already has an answer.

The older question in this case does not have an answer. I have seen this before on MV&M, so I would like to draw attention to:

...already has an answer.

It seems like the appropriate way to handle the scenario would be to mark the older question as a duplicate since the newer question has answers.

Or am I missing something?

Close voting is actually prevented if the "master" question is unanswered.* The exception is when the posts are by the same author, as these are. Otherwise, the close vote dialog would not have allowed the vote to be cast: 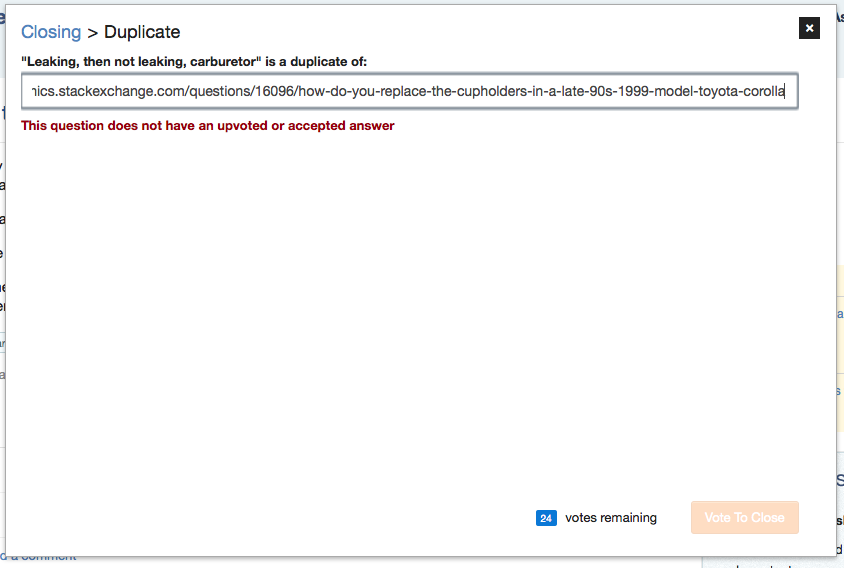 The exception is a small check against double-posting: someone asking a question, then asking the same thing again an hour or a day later. (This guard is much more necessary on larger sites than on a growing beta like this one, but it applies across SE regardless.)

I assume that the close voter believed that this was essentially a double-post: a new/revised question on the same issue. I won't argue that belief one way or the other, but close voting is the correct choice if you believe that. The author should edit the original rather than reposting.

I will also point out that the newer question was answered nearly two days after the close vote was cast.

*Where "unanswered" is actually defined as "no answer that's upvoted or accepted".

Not the answer you're looking for? Browse other questions tagged discussion .

Welcome!
This site is for discussion about Motor Vehicle Maintenance & Repair Stack Exchange. You must have an account there to participate.
Help